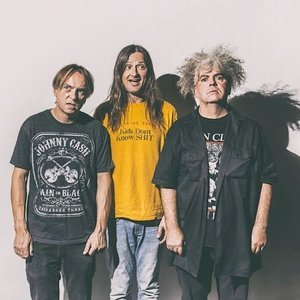 The Melvins celebrate Valentine's Day with “Melvins TV: Volume 2, Divine Monkeyshines Valentine's Day Special,” a 5-song livestreaming event also featuring interviews and extras, on Feb. 14 at 12 noon pacific/3 pm eastern/8 pm gmt/7 am aedt.
$5 tickets are available now via https://melvins.veeps.com. A limited-edition, commemorative poster and two exclusive t-shirts are available to attendees. The stream will be available to view or purchase for a full week following the Feb. 14 debut. The Dale Crover Band opens.
“Round two of Melvins TV!” said Buzz Osborne. “Just in time for Valentine’s Day! Five different songs plus band interviews and other cool stuff. All this fine entertainment for only $5.”
The second in a series of streaming events, the online event features the core Melvins line-up of Osborne, Dale Crover and Steven McDonald.

The Melvins are an American rock band that formed in 1983 in Montesano, Washington. They have mostly performed as a trio, as well as a quartet with two drummers in recent years. Since 1984, vocalist and guitarist Buzz Osborne and drummer Dale Crover have been constant members. The band was named after a supervisor at a Thriftway in Montesano, Washington, where Osborne also worked as a clerk. "Melvin" was despised by other employees, and the band's members felt it to be an appropriately ridiculous name. Their early work was key to the development of both grunge and sludge metal.