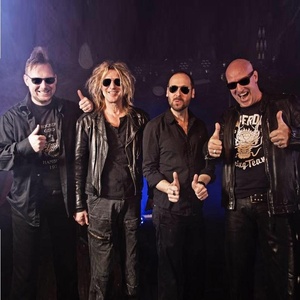 Concert of Iron Savior in ResonanzWerk

You have a great opportunity to see Iron Savior, on Aug. 20, 2021 at ResonanzWerk in Oberhausen.

Iron Savior are a German power metal band that was formed in Hamburg, Germany, in 1996. Following a period of several years working behind the scenes in music production, multi-instrumentalist and producer/engineer Piet Sielck joined with former Helloween bandmate Kai Hansen and then-drummer for Blind Guardian Thomen Stauch in a new project that would blend power metal with a high-concept science fiction story. The band's debut album Iron Savior introduced the story that would be told over the course of multiple albums, featuring a self-aware space vessel called the Iron Savior and its relationship to the mythical lost civilization of Atlantis.

Critics have compared Iron Savior's sound and musical approach to classic heavy metal bands like Judas Priest, Iron Maiden, and Queensrÿche. Kai Hansen's presence in the band brought to the Iron Savior albums on which he appeared a style heavily influenced by Gamma Ray and Helloween.

Despite numerous lineup changes, Piet has continued to direct the band and is currently the only remaining founding member.

Essener Str. 259, 46047 Oberhausen, Germany
Oberhausen, Germany
See all rock & metal events in ResonanzWerk
You may also like
{"location":"City", "band":"Band name", "genre": "Genres", "place":"Place", "event":"Festivals in"}
{"message":"We use cookies to enhance your experience. By continuing to visit this site you agree to our use of cookies.","info":"More info", "link":"https://en.wikipedia.org/wiki/Cookie" }