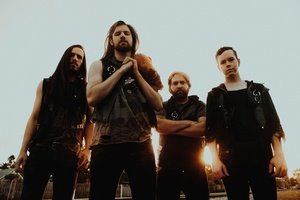 Æther Realm formed in June, 2010, consisting of Vincent Jones (Bass/Vocals/Synths), Heinrich Arnold (Guitar), and Tyler Gresham (Drums). The first year of their existence was spent writing music, playing local shows, and generally creating the foundation that the band would be built upon. In 2011, Jack Rodriguez­Dougherty joined the group on guitar. Later, Jack was replaced by guitarist Donny Burbage in mid 2014.

In July of 2011, the band entered The Basement Studios with Jamie King (Between the Buried and Me, The Human Abstract, Wretched) and recorded their first two­song demo, Odin Will Provide. The demo was released in September of the same year.
The band began recording their first full length in January 2012, and released the first single, Swampwitch, from the album in May of the same year. Their first tour followed, hitting the majority of the east coast in June. Their debut full length, One Chosen by the Gods, was released in January of 2013, and was accompanied by another short promotional tour.

In May 2013, Æther Realm toured the East Coast and Midwest with Wilderun, another folk metal band from the US. The band has since been playing regional shows and writing new material. The first single, entitled The Magician, from the band’s untitled sophomore album, was released on November
27th, 2013.