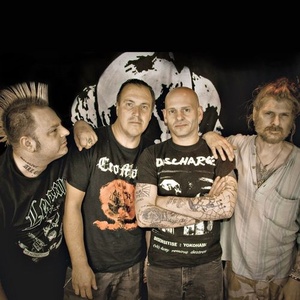 You have a great opportunity to see Discharge, on April 17, 2020 at Salle Le CAP in Toulouse.

Discharge are a British rock band formed in 1977 by Terence "Tezz" Roberts and Royston "Rainy" Wainwright. While the band had substantial line-up changes over its history, the classic line-up from the early 1980s featured bassist Wainwright, drummer Gary Maloney, Anthony "Bones" Roberts playing guitar, and vocalist Kelvin "Cal" Morris.
The band is characterized by a minimalistic approach to music and lyrics, using a heavy, distorted, and grinding guitar-driven sound and raw, shouted vocals similar to a political speech, with lyrics on anarchist and pacifist themes, over intense drone-like rhythms. The band's sound has been called a "grave-black aural acid assault." Discharge "paved the way for an astounding array of politically motivated, musically intense and deeply confrontational bands". Discharge was "explicitly political" and used a "revolutionary/activist" attitude that moved hardcore away from its pub rock origins and towards a "dangerous and provocative" territory.
AllMusic calls the band's sound a "high-speed noise overload" characterized by "ferocious noise blasts" The band's 1982 debut album, Hear Nothing See Nothing Say Nothing, went to number two on the UK Indie Charts and number 40 in the UK Album Chart. Treble magazine calls HNSNSN one of the ten essential hardcore albums, in a list that includes Black Flag's Damaged and the Dead Kennedys' Fresh Fruit for Rotting Vegetables. In the early 1980s, numerous singles and EPs placed in the top 10 of the UK Indie Charts, including the 1981 EP Why? (#1) and the 1982 single State Violence State Control.
Hear Nothing See Nothing Say Nothing paved the way for thrash metal, black metal, crust punk, grindcore and various extreme metal subgenres. The band's "brutal, extremist approach" and "extreme thrash noise" style of playing eventually led to the thrash genre . "Discharge's influence on heavy metal is incalculable and metal superstars such as Metallica, Anthrax and Sepultura have covered Discharge's songs in tribute." Discharge was a major influence on at least two generations of metal. Along with Napalm Death and Extreme Noise Terror, Discharge have been credited for laying the groundwork for grindcore. The musical genre of d-beat is named after Discharge and the band's distinctive drumbeat.