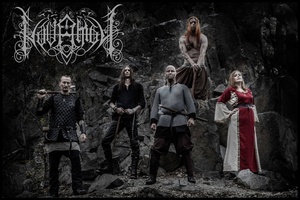 You have a great opportunity to see Havamal, on April 11, 2020 at Rockbaren in Nyköping.

HAVAMAL was formed in 2016 in Stockholm, Sweden. The members came from different musical background, but shared the goal to create the symphonic yet brutal sound that is HAVAMAL. Inspired by norse mythology and viking culture, HAVAMAL started writing the first songs, and after a few successful local shows, the debut EP “Call of the north” was recorded and self-released.

"Call of the North is not an album where one purchases it and stops listening after a coyple of spins. Its an Album that is worthy of putting on repeat for several ages" / Metal Centre

The debut EP has received overwhelmingly good reviews from all around the world, and have been featured on various radiostations and magazines. Although HAVAMAL has been compared to bands such as Amon Amarth, Kalmah, Children of Bodom, Brymir, and more, the sound is unique and easily recognized.

In June 2019 HAVAMAL released the full length album "Tales from Yggdrasil" through Art Gates Records, and it immediately received great reviews and attention all over the world.