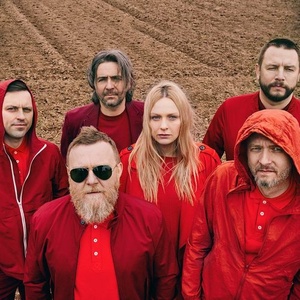 You have a great opportunity to see Hey, on April 5, 2020 at Moonlight Lounge in Albuquerque, NM.

Katarzyna Nosowska (lead voc), 2006
Jacek Chrzanowski during Rocket Festiwal 2013 in Warsaw, Poland.
Marcin Zabrocki during Rocket Festiwal 2013 in Warsaw, Poland.
Marcin Żabiełowicz during Rocket Festiwal 2013 in Warsaw, Poland.
Hey is a Polish rock band founded in Szczecin in 1991 by guitarist Piotr Banach and lead singer Kasia Nosowska. It is one of the most popular Polish music acts of the 1990s.
Although Hey sometimes described themselves as the first Polish grunge band, their melodic, guitar-driven rock and eclectic appearance owed more to new wave and heavy metal influences; their first three albums contained songs in both Polish and English. During the band's mid-1990s heyday, they sold out stadiums throughout Poland, and attempted to break into the English-language market with a series of concerts overseas and an English version of their 1995 album ?. When this failed to arouse interest, the band began to write in Polish only, and gradually adopted a harder-edged, more industrial-influenced sound. Overall, the band has sold over 2.2 million album copies.
In addition, Nosowska has also enjoyed a successful career as a solo artist. She has released six solo albums that derive more from an electronica style.