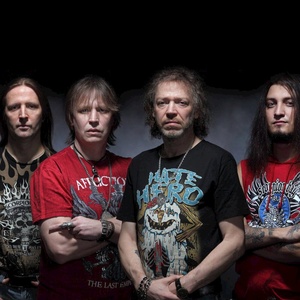 You have a great opportunity to see Монгол Шуудан, on April 3, 2020 at Aglomerat in Moscow.

"Монгол Шуудан" means "Mongol Post" in the Mongolian language. This unusual choice is explained by the band vocalist Valeri Skoroded very simply: the band was standing at a bus stop by a Soyuzpechat [Wikidata] booth and their eyes were caught by fancy postage stamps with the exotic words "Монгол Шуудан" ([ˈmɔŋkɔɮ ˈʃuːtɑŋ]) on them. (Note: Mongolian is written in Cyrillic script.)

The group's music was mostly anti-governmental, pro-anarchist in its message, with the group identifying themselves with the Black Guards of the Russian Civil War. More accurately, Mongol Shuudan associated themselves with the Revolutionary Insurrectionary Army of Ukraine, the peasant-anarchist guerrilla army led by Nestor Makhno.

Many of their songs are modernized versions of anarchist civil war songs. Some of their songs include "Commissar," "Chekist," "Freedom or Death," "Sabbath on the Bald Mountain", and so forth. Since the collapse of the Soviet Union, the group has continued to produce music, much of which is available on their website.

The band has performed over 100 shows and toured Europe, Israel, and all of the Russian Federation.