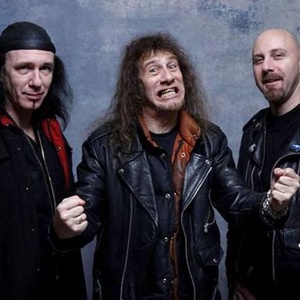 You have a great opportunity to see Anvil, on July 8, 2020 at L'ANTI Bar & Spectacles in Québec City.

Anvil are a Canadian heavy metal band from Toronto, Ontario, formed in 1978. The band consists of Steve "Lips" Kudlow (vocals, guitar), Robb Reiner (drums) and Chris Robertson (bass). To date, the band has released sixteen studio albums, and has been cited as having influenced many notable heavy metal groups, including Megadeth, Slayer, Anthrax and Metallica.
The band, in particular Kudlow and Reiner, was the subject of the 2008 documentary film, Anvil! The Story of Anvil, directed by the screenwriter and former Anvil roadie, Sacha Gervasi. Upon its release, the film garnered critical acclaim from many major publications, and has since brought the band renewed recognition, including opening slots with AC/DC and Saxon. Appearances at both major heavy metal festivals, including Download, Loud Park and Hellfest, and independent music festivals like Bumbershoot and SXSW, also followed the release of the film. Reviewers described Anvil as a pioneering hair metal band that was popular in the 1980s but then faded into obscurity in the 1990s, while refusing to stop playing, recording and gigging. Anvil's antics on and off stage, the setbacks they suffered, and their determination to keep going was compared to the fictional band Spinal Tap.

251 Rue Dorchester, Québec City, QC G1K 5Z6, Canada
Québec City, Canada
See all rock & metal events in L'ANTI Bar & Spectacles
You may also like
{"location":"City", "band":"Band name", "genre": "Genres", "place":"Place", "event":"Festivals in"}
{"message":"We use cookies to enhance your experience. By continuing to visit this site you agree to our use of cookies.","info":"More info", "link":"https://en.wikipedia.org/wiki/Cookie" }