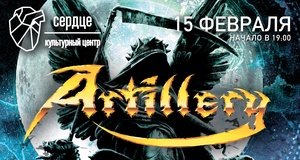 You have a great opportunity to see Artillery, on Feb. 15, 2020 at Center of Culture Serdce in St Petersburg.

Artillery is a Danish thrash metal band. They participated in the early development of the genre, and their highly energetic, riff-centric and often fast-paced music is similar in style to that of Voivod, Coroner, Megadeth and Sabbat from the same era. After releasing three full-length albums and touring extensively throughout the 1980s and early 1990s, Artillery disbanded in 1991, but reunited seven years later, only to disband once again in 2000. However, they reformed again in 2007 and are still together today.