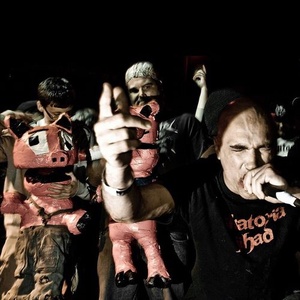 Green Jellÿ (pronounced "green jello") is an American comedy rock band formed in 1981. Originally named Green Jellö, the band changed its name due to legal pressure from Kraft Foods, the owners of the Jell-O trademark, who claimed that it was an infringement of their trademark. Despite the spelling difference, the new name and the old are pronounced identically.
Known for sophomoric humor, theatrical performances and intentionally crude musicianship, Green Jellÿ has had hundreds of members during the band's existence, with vocalist Bill Manspeaker the only consistent member throughout. The band's early 1990s lineup, during their most popular phase, Cereal Killer included several musicians who went on to appear in other major 1990s acts, most notably Tool. Their biggest hit was the single "Three Little Pigs", adapted from the nursery rhyme. Green Jellÿ released FR3TÖ F33T, their first music video in 22 years on May 3, 2017.