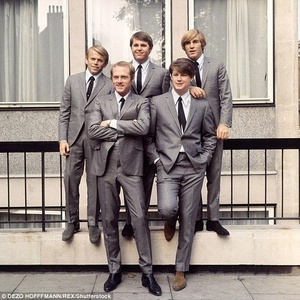 Concert of The Beach Boys in State Theatre of Ithaca

THE BEACH BOYS are led by Mike Love and Bruce Johnston

About The Beach Boys

The Beach Boys are an American rock band formed in Hawthorne, California, in 1961. The group's original lineup consisted of brothers Brian, Dennis, and Carl Wilson; their cousin Mike Love; and their friend Al Jardine. Distinguished by their vocal harmonies and early surf songs, they are one of the most influential acts of the rock era. The group, led by their principal songwriter and producer Brian, pioneered novel approaches to popular music form and production, combining their affinities for jazz-based vocal groups, 1950s rock and roll, and black R&B to create their unique sound. He later arranged his compositions for studio orchestras and explored a variety of other styles, often incorporating classical or jazz elements and unconventional recording techniques in innovative ways.
The Beach Boys began as a garage band managed by the Wilsons' father Murry, with Brian's increasingly sophisticated songwriting and recording abilities dominating their creative direction. Emerging at the vanguard of the "California Sound", they performed original material that reflected a southern California youth culture of surfing, cars, and romance. After 1964, they abandoned the surfing aesthetic for more personal lyrics and multi-layered sounds. In 1966, the Pet Sounds album and "Good Vibrations" single vaulted the group to the top level of rock innovators and established the band as symbols of the nascent counterculture era. Following the dissolution of the group's Smile project in 1967, Brian gradually ceded production and songwriting duties to the rest of the band, reducing his input because of mental health and substance abuse issues. The group's public image subsequently faltered, and despite efforts to continue their psychedelic ventures and reclaim their hippie audiences, they were dismissed as an embodiment of the values and outlooks shared by early 1960s white, suburban teenagers.
The continued success of their greatest hits albums during the mid 1970s precipitated the band's transition into an oldies act, a move that was denigrated by critics and many fans. Since the 1980s, much-publicized legal wrangling over royalties, songwriting credits and use of the band's name transpired. Dennis drowned in 1983 and Carl died of lung cancer in 1998. After Carl's death, many live configurations of the band fronted by Mike Love and Bruce Johnston continued to tour into the 2000s while other members pursued solo projects. Even though Wilson and Jardine have not performed with Love and Johnston's band since their one-off 2012 reunion tour, they remain a part of the Beach Boys' corporation, Brother Records Inc.
The Beach Boys are one of the most critically acclaimed, commercially successful, and widely influential bands of all time. The group had over eighty songs chart worldwide, thirty-six of them US Top 40 hits (the most by an American rock band), four reaching number-one on the Billboard Hot 100 chart. The Beach Boys have sold in excess of 100 million records worldwide, making them one of the world's best-selling bands of all time and are listed at No. 12 on Rolling Stone magazine's 2004 list of the "100 Greatest Artists of All Time". The core quintet of the three Wilsons, Love and Jardine were inducted into the Rock and Roll Hall of Fame in 1988.