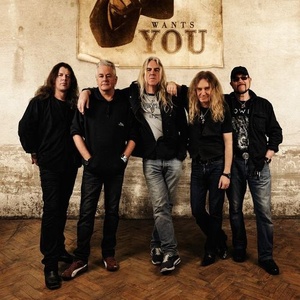 TICKET – T&C (ANTI TOUT MEASURES) 1. Your ticket purchase constitutes a personal, revocable license and, at all times, remains the property of the promoters. 2. Your ticket/s are sold by the promoters directly to you the consumer. Any tickets purchased by business or traders in breach of the T&Cs of ticket sale will be cancelled. By accepting these T&Cs you confirm that you are a consumer. 3. Your ticket/s will IMMEDIATELY BECOME INVALID if resold OR OFFERED FOR SALE unless the sale is through the official re-sale channels advertised. 4. For a ticket to be valid the lead booker must at any point be able to provide the below: i) The payment credit or debit card used for the purchase and shown on the booking confirmation as it is your ticket/s. ii) The booking confirmation. iii) A valid photo ID matching the customer name on the booking confirmation and the credit card. Failure to bring all of the items i), ii) and iii) above may result in refusal of admission to the concert.

Saxon are an English heavy metal band formed in 1977, in South Yorkshire. As one of the leaders of the new wave of British heavy metal, they had eight UK Top 40 albums in the 1980s including four UK Top 10 albums and two Top 5 albums. The band also had numerous singles in the UK Singles Chart and chart success all over Europe and Japan, as well as success in the US. During the 1980s Saxon established themselves as one of Europe's biggest metal acts. The band tours regularly and have sold more than 15 million albums worldwide. They are considered one of the classic metal acts and have influenced many bands such as Metallica, Mötley Crüe, Pantera, Sodom.
Singer Peter "Biff" Byford at the Rockharz Open Air 2016
Bassist Tim "Nibbs" Carter and guitarist Doug Scarratt at the Rockharz 2016 (Biff Byford in the background)