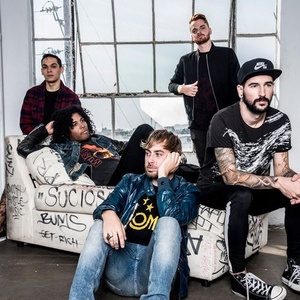 Concert of Issues in The Pageant

You have a great opportunity to see Issues with bands Dance Gavin Dance, Animals As Leaders, Veil Of Maya, on April 11, 2020 at The Pageant in St. Louis, MO.

Issues is an American nu metalcore band formed in Atlanta, Georgia signed to Rise Records. The band currently consists of clean vocalist Tyler Carter, unclean vocalist Michael Bohn, bassist Skyler Acord, guitarist AJ Rebollo, and drummer Josh Manuel. Following Carter's and Bohn's departure from their former band Woe, Is Me, they formed the band and recorded their debut EP, Black Diamonds, which was released on November 13, 2012 by Greg Long. After touring with bands such as Of Mice & Men, Beartooth, and Sleeping With Sirens, the band released the single "Hooligans" and began recording their self-titled debut album throughout 2013. In 2014, the band released their album Issues on February 18, 2014, and peaking at number 9 on the U.S. Billboard 200 chart, selling 22,000 copies within its first week. The band has revealed via vocalist Carter's Facebook page, that a new album titled Headspace would be released on May 20, 2016. On May 16, the album was leaked through certain websites and fully uploaded to YouTube.