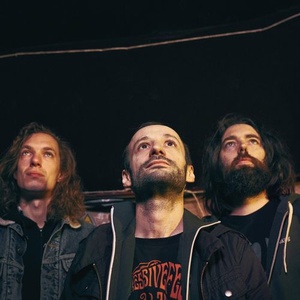 Colour Haze is a stoner/psychedelic rock group from Munich, Germany, consisting of singer and guitarist Stefan Koglek, drummer Manfred Merwald and bassist Philipp Rasthofer.
Formed in the mid-nineties, Colour Haze is one of the oldest German stoner outfits, and have since then become one of the flagships of the German stoner rock scene. Tours of the band have included headline spots at smaller national and international rock festivals, such as the U.S. festival Emissions from the Monolith in 2006 alongside Orange Goblin, Boris, and General Tso. Local media coverage have included a broadcast of a concert on national television, when Colour Haze appeared at Rockpalast in 2007.
Emerging from a sound heavily influenced by Black Sabbath, Grand Funk Railroad on their first records, they moved away from a heavy to a more melodic sound, e.g. on their album All (2008), as remarked by Denmark's LowCut webzine.