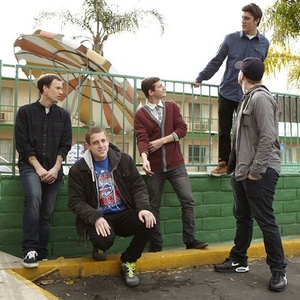 Concert Such Gold in The Vault Music Hall

Join us at The Vault Music Hall, in partnership with Purchase Street Records, as we present A Wilhelm Scream w/s/g's Such Gold, Dream Job and Bunch of Fives on Saturday December 28 at 8:30pm.
Tickets are $20 for General Admission prior to show date or $25 for General Admission at the door.
Doors Open at 7pm!
Bunch of FivesDream JobSuch GoldA Wilhelm Scream
MUST BE 21 or OLDER with Valid ID for Entry.
There is NO SMOKING OR VAPING allowed inside the Music Hall or in the Bathrooms.  If you are caught doing either, you will be escorted off premises and forfeit your tickets.

About artist Such Gold

Such Gold is a punk rock band from Rochester, New York, currently consisting of Ben Kotin on guitar and vocals, Nate Derby on guitar, Jon Markson on bass and vocals and Matt Covey on drums. Such Gold formed officially in 2009, and self-released Demo 2009 in the Spring of that year.
The band signed to Mightier Than Sword Records in June 2009 and released a CD EP/7” titled “Stand Tall” in August 2009.
In Spring 2010 Such Gold announced signing to 6131 Records and recorded their new CD EP/12”, titled “Pedestals” ; “Pedestals” was released digitally in September 2010, and physically in November 2010.
A series of split 7”s were announced in early 2011, including a split with Into It. Over It., released in May 2011 and a split with A Loss for Words, released November 2011. The splits were released as a collaboration between Mightier Than Sword Records and No Sleep Records, with the A Loss For Words split also being released on CD in Japan via Ice Grill$ Records.
Such Gold has toured the US extensively, have toured in Australia, Japan, UK/EU, Canada and Costa Rica, and have played a number of festivals including The Fest, Sound and Fury, Bled Fest, SXSW, Fragile Joe's House of Metal Fest, Blood Sweat and Beers and Groezrock.
The band signed to Razor & Tie records in July 2011, and announced a full-length to be released some time in 2012. In January 2012, Such Gold traveled to Los Angeles, CA to record with highly acclaimed producer Steve Evetts. The full-length is titled “Misadventures” and was released August 14, 2012.
In June 2013, it was announced that Skylar Sarkis left the band. Singer Ben Kotin has taken over on guitar.
Misadventures reached #6 on the Billboard Heatseekers chart.
In May 2014, the band announced the departure of drummer and founding member Devan Bentley, to be replaced by former Shai Hulud drummer, and current The Hempsteadys drummer, Matt Covey. Such Gold also announced they had entered The Blasting Room with producer Bill Stevenson to record their follow-up LP to 2012's Misadventures.
Members of Such Gold also play in the bands Taking Meds and Holy War.
On July 1, 2015, Such Gold announced a UK tour supporting headliner Gnarwolves.
On August 1st, 2016, the band announced via Facebook that a compilation album featuring their EP Pedestals and their splits with Into It. Over It. and A Loss For Words will be released on September 9th. The tracks from Pedestals have been remixed and remastered, while the split tracks remain as the original versions.
Such Gold will also be touring the U.S. with Millencolin