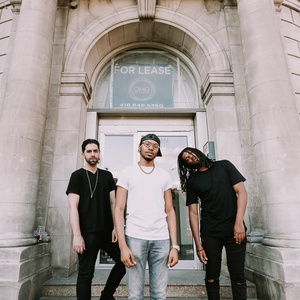 Upcoming events: 35
Subscribers:  1
My Rock Shows — search for concerts and buy tickets in more than 50 countries.
Join us
Sign in
Follow us on social media

Here you can find all upcoming The OBGMs concerts. If the concert schedule is not right, please contact us and we will add a gig of The OBGMs in 2022 or 2023 in our database.

Click the "Subscribe" button and get notified by MyRockShows about The OBGMs upcoming events. Explore this page to find details of upcoming events of The OBGMs, including the venue address and tickets cost.

The OBGMs (The oOohh Baby Gimme Mores) are a Canadian punk rock band from Toronto, Ontario. They are most noted for their 2020 album The Ends, which was a shortlisted finalist for the 2021 Polaris Music Prize.

The band consists of vocalist Densil McFarlane, guitarist Joe Brosnan and drummer Colanthony Humphrey. Keyboardist Jeuel Roberts was also a member of the band in the mid-2010s, but is no longer with the band.

The band was formed in 2007, initially as a hip hop production duo consisting of McFarlane and Humphrey. Their music became more punk-oriented after they were arrested in a racial profiling incident, which interfered with McFarlane's plans to attend university in the United States. They released their debut EP, Interchorus, in 2009.

Because McFarlane and Humphrey are Black Canadians, in their early years the band were often booked on urban music bills, and struggled to break through in the punk scene. This began to change in 2014 after the band were selected for a Budweiser ad campaign, in which they were told that they were being interviewed for a documentary film on undiscovered independent bands, but when they arrived at the interview venue they were in fact immediately offered the opportunity to play a show for a packed house comprising the largest audience they had ever performed for to that point. They subsequently performed at Budweiser's Made in America Festival, and at the New York City Afropunk Festival. They released their self-titled full-length debut album that year.

The Ends, produced by Dave Schiffman and recorded at Dreamhouse Studios in Toronto, was released on October 30, 2020. Around the same time, they were selected alongside JJ Wilde, SonReal and Northcote as one of four musical acts to be promoted by Collective Arts Brewing's Audio/Visual Lager, which helps to promote independent musicians with special limited edition band-themed cans.

In March 2021, the band also launched the Band Practice podcast.

Humphrey is the older brother of rapper Clairmont the Second.

Alternative Rock Punk Rock
They are subscribed to this band in