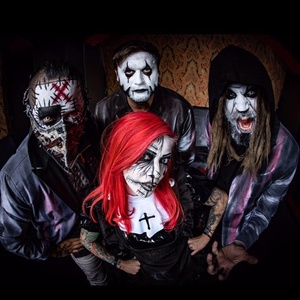 Upcoming events: 0
Subscribers:  2
My Rock Shows — search for concerts and buy tickets in more than 50 countries.
Join us
Sign in
Follow us on social media

Here you can find all upcoming Raven Black concerts. If the concert schedule is not right, please contact us and we will add a gig of Raven Black in 2022 or 2023 in our database.

Click the "Subscribe" button and get notified by MyRockShows about Raven Black upcoming events. Explore this page to find details of upcoming events of Raven Black, including the venue address and tickets cost.

Filter by countries
All
USA
See past events of Raven Black →

There are no upcoming events of Raven Black, you might be interested in the following events nearby:

Formed in 2012, Los Angeles, CA, and changing the lineup in 2014, theatrical metal band currently consists of 4 members:
Raven Black – Vocals;
Muppet – Drums/Vocals;
The Doctor – Lead Guitar/Vocals;
Stitches – Bass.
Together, the quartet has created a soundtrack to the Dark Metal Carnival, releasing the 2016 EP Seven Sins, the 2018 album 13 and the 2020 album The Key. According to lead vocalist, Raven, the band was forming on the idea of combing natural passion for theatre and dark and heavy musical influences, whether classical, metal, rock gothic or punk to create their own unique sound, which would ultimately enhance their live performance and her character vocal styles.

Alternative Metal Gothic Rock
They are subscribed to this band in