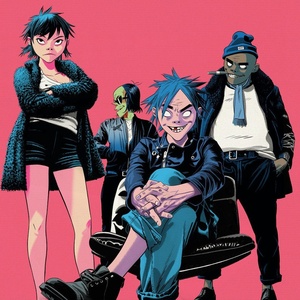 Upcoming events near: 28
Subscribers:  92
My Rock Shows — search for concerts and buy tickets in more than 50 countries.
Join us
Sign in
Follow us on social media

Here you can find all upcoming Gorillaz concerts. If the concert schedule is not right, please contact us and we will add a gig of Gorillaz in 2022 or 2023 in our database.

Click the "Subscribe" button and get notified by MyRockShows about Gorillaz upcoming events. Explore this page to find details of upcoming events of Gorillaz, including the venue address and tickets cost.

Gorillaz are a British virtual band created in 1998 by musician Damon Albarn and artist Jamie Hewlett. The band primarily consists of four animated members: 2-D, Murdoc Niccals, Noodle, and Russel Hobbs. Their fictional universe is presented in music videos, interviews and short cartoons. In reality, Albarn is the only permanent musical contributor, and Gorillaz' music often features collaborations with a wide range of featured artists. Remi Kabaka Jr. became the producer for the band in 2016 after several years of providing the voice of Russel Hobbs and was listed as an official member alongside Albarn and Hewlett in the 2019 documentary Gorillaz: Reject False Icons.

The band's third album, Plastic Beach (2010), featured environmentalist themes, an electropop approach and an expanded roster of featured artists. Their fourth album, The Fall (2010), was recorded on the road during the Escape to Plastic Beach Tour and released on 25 December 2010. The band's fifth album, Humanz, was released after a seven-year hiatus on 28 April 2017. Their sixth album, The Now Now (2018), featured stripped-down production and a greater musical focus on Albarn. Gorillaz' latest project is Song Machine, a music-based web series with episodes that consist of standalone singles and accompanying music videos featuring different guests each episode, resulting in their seventh album, Song Machine, Season One: Strange Timez (2020).

Gorillaz has presented itself live in a variety of different ways throughout the band's history, such as hiding the live band from the audience's view in the early years of the project, projecting animated band members on stage via computer graphics and traditional live touring featuring a fully visible live band. The band have sold over 24 million records worldwide and are cited by Guinness World Records as the world's "Most Successful Virtual Band". They have won a Grammy Award, two MTV Video Music Awards, an NME Award and three MTV Europe Music Awards. They have also been nominated for 11 Brit Awards and won Best British Group at the 2018 Brit Awards.

Alternative Rock Post-Hardcore
They are subscribed to this band in