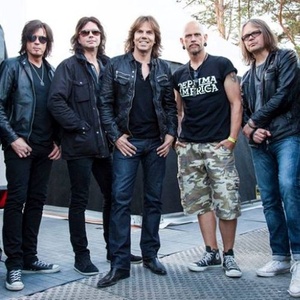 Upcoming events: 4
Subscribers:  9
My Rock Shows — search for concerts and buy tickets in more than 50 countries.
Join us

Here you can find all upcoming Europe concerts. If the concert schedule is not right, please contact us and we will add a gig of Europe in 2021 or 2022 in our database.

Click the "Subscribe" button and get notified by MyRockShows about Europe upcoming events. Explore this page to find details of upcoming events of Europe, including the venue address and tickets cost.

Please contact us in case you see a mistake in Europe events dates or if MyRockShows is leaving out any of Europe upcoming gigs.

Europe is a Swedish rock band formed in Upplands Väsby, by vocalist Joey Tempest, guitarist John Norum, bass guitarist Peter Olsson, and drummer Tony Reno. They got a major breakthrough in Sweden in 1982 by winning the televised competition "Rock-SM" (Swedish Rock Championships) It was the first time this competition was held, and Europe became a larger success than the competition itself. As heavy-metal musicians they could play their instruments far better than any of their fellow competitors and their victory in the final was far from unanticipated (the competition was held in several stages). The competition continued for some years longer, but never reached any other heights.
Since its formation, Europe has released ten studio albums, three live albums, three compilations and nineteen music videos.
Europe rose to international fame in the 1980s with their third album, 1986's The Final Countdown, which has sold over 3 million copies in the United States and 15 million copies worldwide (including album and single). Europe have sold over 25 million records worldwide. The band has achieved two top 20 albums on the Billboard 200 chart (The Final Countdown and Out of This World) and two top 10 singles on the Billboard Hot 100 chart ("The Final Countdown" and "Carrie").
Europe went on hiatus in 1992, reunited temporarily for a one-off performance in Stockholm on New Year's Eve 1999 and announced an official reunion in 2003. Since then the band has released five albums, Start from the Dark (2004), Secret Society (2006), Last Look at Eden (2009), Bag of Bones (2012) and War of Kings (2015).
Europe has achieved new attention in the US due to being featured in a GEICO Insurance cable television commercial campaign viewed for many months across the US in 2015-16.
The band is mainly influenced by Whitesnake, Deep Purple, Rainbow, Led Zeppelin, Thin Lizzy, UFO and Michael Schenker Group.

Hard Rock Glam Rock
They are subscribed to this band