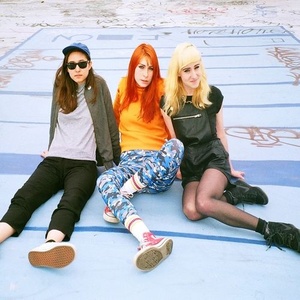 Here you can find all upcoming Potty Mouth concerts. If the concert schedule is not right, please contact us and we will add a gig of Potty Mouth in 2021 or 2022 in our database.

Potty Mouth are an American pop punk band from Northampton, Massachusetts, formed in 2011 by Abby Weems, Ally Einbinder, Victoria Mandanas and Phoebe Harris. Einbinder, Mandanas and Harris all attended Smith College. Weems is a Western Massachusetts native, having grown up in Amherst, Massachusetts.
The band currently consists of Ally Einbinder, Victoria Mandanas and Abby Weems. They relocated to Los Angeles, California, in 2016.
In Summer 2013, Stereogum featured Potty Mouth in their Bands to Watch series.
Throughout 2016, Potty Mouth was an opening act for Scottish synth-pop band Chvrches on tour dates in Chicago, New York City and Washington, DC.

Rocket from the Crypt