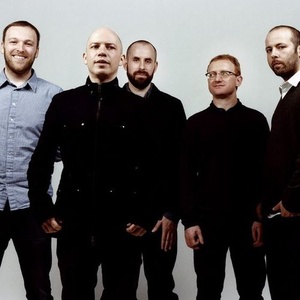 Upcoming events: 6
Subscribers:  7
My Rock Shows — search for concerts and buy tickets in more than 50 countries.
Join us
Sign in
Follow us on social media

Here you can find all upcoming Mogwai concerts. If the concert schedule is not right, please contact us and we will add a gig of Mogwai in 2022 or 2023 in our database.

Click the "Subscribe" button and get notified by MyRockShows about Mogwai upcoming events. Explore this page to find details of upcoming events of Mogwai, including the venue address and tickets cost.

Mogwai (/ˈmɒɡwaɪ/) are a Scottish post-rock band, formed in 1995 in Glasgow. The band consists of Stuart Braithwaite (guitar, vocals), Barry Burns (guitar, piano, synthesizer, vocals), Dominic Aitchison (bass guitar), and Martin Bulloch (drums). The band typically compose lengthy guitar-based instrumental pieces that feature dynamic contrast, melodic bass guitar lines, and heavy use of distortion and effects. The band were for several years signed to Glasgow label Chemikal Underground, and have been distributed by different labels such as Matador in the US and Play It Again Sam in the UK, but now use their own label Rock Action Records in the UK, and Sub Pop in North America. The band were frequently championed by John Peel from their early days, and recorded seven Peel Sessions between 1996 and 2004. Peel also recorded a brief introduction for the compilation Government Commissions: BBC Sessions 1996–2003.

Explosions In The Sky

God Is An Astronaut

This Will Destroy You

Post-Rock
They are subscribed to this band