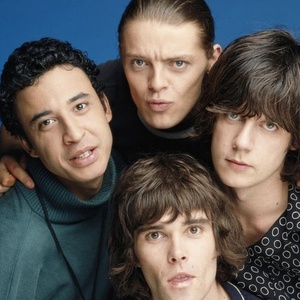 Upcoming events: 0
Subscribers:  8
My Rock Shows — search for concerts and buy tickets in more than 50 countries.
Join us
Sign in
Follow us on social media

Here you can find all upcoming The Stone Roses concerts. If the concert schedule is not right, please contact us and we will add a gig of The Stone Roses in 2022 or 2023 in our database.

Filter by countries
All
See past events of The Stone Roses →

There are no upcoming events of The Stone Roses, you might be interested in the following events nearby:

About The Stone Roses

The Stone Roses are an English rock band formed in Manchester in 1983. They were one of the pioneering groups of the Madchester movement that was active during the late 1980s and early 1990s. The band's most prominent lineup consists of vocalist Ian Brown, guitarist John Squire, bassist Mani, and drummer Reni.
The band released their debut album, The Stone Roses, in 1989. The album was a breakthrough success for the band and garnered critical acclaim, with many critics regarding it as one of the greatest British albums ever recorded. At this time the group decided to capitalise on their success by signing to a major label. Their record label at the time, Silvertone, would not let them out of their contract, which led to a long legal battle that culminated with the band signing with Geffen Records in 1991. The Stone Roses then released their second album, Second Coming, which was met with mixed reviews in 1994. The group soon disbanded after several lineup changes throughout the supporting tour, which began with Reni first departing in late 1995, followed by Squire in April 1996. Brown and Mani dissolved the remains of the group in October 1996 following their appearance at Reading Festival.
Following much intensified media speculation, The Stone Roses called a press conference on 18 October 2011 to announce that the band had reunited and would perform a reunion world tour in 2012, including three homecoming shows in Heaton Park, Manchester. Plans to record a third album in the future were also floated. In June 2012, Chris Coghill, the writer of the new film which is set during the Stone Roses 1990 Spike Island show, revealed that the band "have at least three or four new tracks recorded". In June 2013, a documentary about the band's reformation directed by Shane Meadows and titled The Stone Roses: Made of Stone was released.
In 2016 they released their first new material in two decades.

Alternative Rock Post-Grunge
They are subscribed to this band in