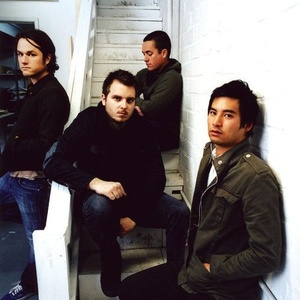 Upcoming events: 25
Subscribers:  5
My Rock Shows — search for concerts and buy tickets in more than 50 countries.
Join us
Sign in
Follow us on social media

Here you can find all upcoming Thrice concerts. If the concert schedule is not right, please contact us and we will add a gig of Thrice in 2022 or 2023 in our database.

Click the "Subscribe" button and get notified by MyRockShows about Thrice upcoming events. Explore this page to find details of upcoming events of Thrice, including the venue address and tickets cost.

Thrice is an American rock band from Irvine, California, formed in 1998. The group was founded by guitarist/vocalist Dustin Kensrue and guitarist Teppei Teranishi while they were in high school. They have been recognized as one of the greatest and most influential bands of the post-hardcore genre.
Early in their career, the band was known for fast, hard music based in heavily distorted guitars, prominent lead guitar lines, and frequent changes in complex time signatures. This style is exemplified on their second album, The Illusion of Safety (2002) and their third album The Artist in the Ambulance (2003). Their fourth album Vheissu (2005) made significant changes by incorporating electronic beats, keyboards, and more experimental and nuanced songwriting. Their fifth effort was a double album entitled The Alchemy Index (2007/2008), released as two sets of two CDs that together make a 4-part, 24-song cycle. Each of the four 6-song EPs of the Alchemy Index features significantly different styles, based on different aspects of the band's musical aesthetic which reflect the elemental themes of fire, water, air and earth, both lyrically and musically. The band's sixth album, entitled Beggars, was released on August 11, 2009, and their seventh, Major/Minor on September 20, 2011. The most recent albums feature a refined combination of the band's different experiments and explorations. On May 27, 2016, Thrice released their eighth studio album, To Be Everywhere Is to Be Nowhere. Each album released by Thrice has had a portion of its sales proceeds donated to a new charitable organization.

Christian Metal Metalcore
They are subscribed to this band