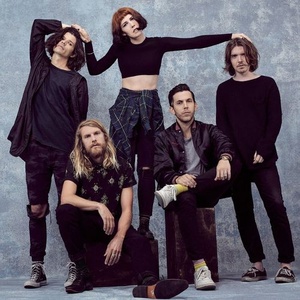 Upcoming events: 10
Subscribers:  2
My Rock Shows — search for concerts and buy tickets in more than 50 countries.
Join us

Here you can find all upcoming Grouplove concerts. If the concert schedule is not right, please contact us and we will add a gig of Grouplove in 2021 or 2022 in our database.

Grouplove (also typeset as GROUPLOVE) is an American band that was formed in 2009 by Hannah Hooper (vocals, keyboards), Christian Zucconi (vocals, guitar), Sean Gadd (bass), Andrew Wessen (guitar, vocals), and Ryan Rabin (drums).
Ryan Rabin produced their debut EP, which was originally released independently, and was later re-released by Canvasback/Atlantic with a bonus track and their hit song, "Colours". Their debut album, Never Trust a Happy Song, was also produced by Rabin and was released worldwide on September 13, 2011.

The Naked and Famous