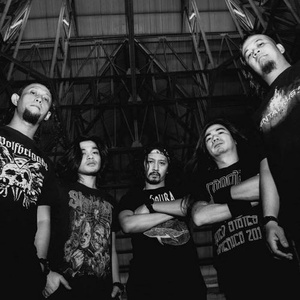 Upcoming events: 1
Subscribers:  1
My Rock Shows — search for concerts and buy tickets in more than 50 countries.
Join us
Sign in
Follow us on social media

Here you can find all upcoming Burgerkill concerts. If the concert schedule is not right, please contact us and we will add a gig of Burgerkill in 2022 or 2023 in our database.

Click the "Subscribe" button and get notified by MyRockShows about Burgerkill upcoming events. Explore this page to find details of upcoming events of Burgerkill, including the venue address and tickets cost.

Burgerkill is an Indonesian metal band, originally from Bandung, capital city of West Java. The band is named after the fast food restaurant, Burger King, as a prank. The band was founded in May 1995 by Aris Tanto a.k.a. Eben, sometimes called 'Ebenz', a young man from Jakarta, who came to Bandung to continue his study. In Bandung, Ebenz met Ivan Scumbag, Kimung, and Dadan. This four personnel became the first line-up of Burgerkill. In 2013, the band won Metal Hammer Golden Gods Awards for Metal As F*ck category.

Post-Rock Progressive Metal
They are subscribed to this band in